It’s 3PM on a rainy Saturday afternoon in March. I rush into the backstage area to join the hundreds of people who have been setting up and preparing since the crack of dawn for an event which will present the collections of over 20 up and coming designers. The show, entitled, Land On Glitter, is a presentation by the graduating students from FHNW Academy of Art and Design | Institute of Fashion Design in Basel, Switzerland.

Upon entering, I receive a badge labelled “model” — a label I thought I’d never wear as a woman standing only 160cm tall. The rehearsals have already been underway for the past six hours and I’m scrambling between production, hair and makeup teams, and dozens of photographers all whilst trying to catch up on what I had missed.

An hour has passed; my makeup is complete, I have mapped out my walking patterns and I’m headed to the hair team. Two lovely (and very attractive men) begin working on my hair. One of the two (@chrismattickhair), proposes we shave my head (an idea which I have been contemplating for a while) unfortunately, due to the nature of my current job, I have to decline. In the end, we style my hair in a sleek over the ears bob which emphasises my cheekbones. The final result: total fashion alien. I can hardly recognise myself for all my distinctive features (my scars, my freckles, my curly hair, etc.) have all been erased.

It’s 5PM, my friend and one of the designers, @ninabritschgi brings me along for an interview. She speaks about her hyper-feminine collection for the petite woman which she describes is “a reimagination of Crime and Punishment by Dostoevsky. Dostoevsky’s St. Petersburg of the 1860’s is much like any major city of today, with mental health, injustice and poverty, self righteousness, arrogance and guilt being central themes of the story” (For more information and to see more photos of Nina’s collection, visit: http://www.ninabritschgi.com/thesis.html).

While the interview is underway, I, the living breathing mannequin, am silently posing for photos and utilising this moment of calmness to reflect on what’s to come.

It’s my first runway experience, I’m wearing three very different looks in the show, and opening two collections (*screams internally). Photographers and videographers are crowding the backstage area capturing the moments leading up to the show. I stand amazed watching as seasoned models pose for photographers in every direction much like a celebrity does on the red carpet. Suddenly it dawns on me that my every move is also being photographed… In an instant, I pick up my jaw from the floor and try to imitate the professionals (though I’m sure there are some photos of me looking like a deer in headlights). If I wasn’t nervous (and inexperienced) enough, I have started recognising some of the models I’m walking with as the co-stars of the likes of Gigi Hadid and Kaia Gerber. Models who have been walking in International Fashion Weeks and are contracted as ambassadors for brands like Versace and Louis Vuitton. Models — unlike myself — who know how to walk… 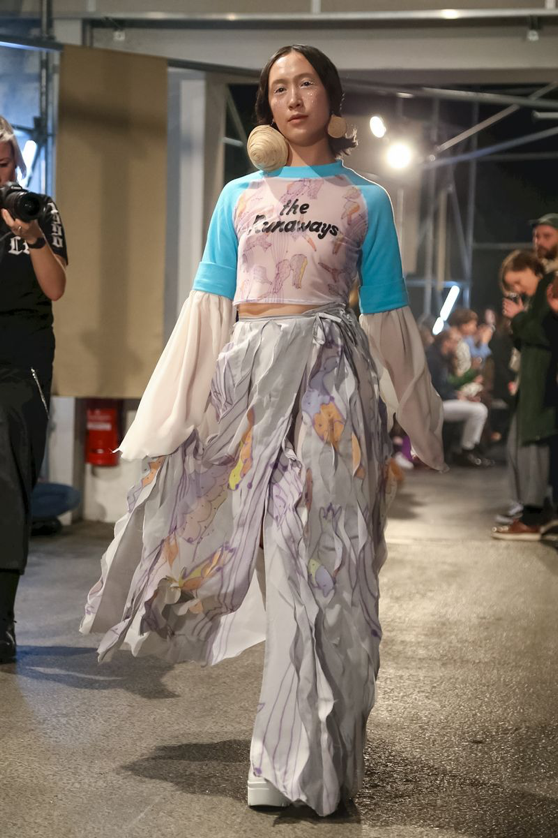 My first look of the evening is by Monika Dosa. It is a two piece sheer and flowing outfit completed by a set of large earrings and white platform go-go boots. My instructions for this look are straight forward: feel the beat of the music, dance, flirt, and have fun! Alright, I think, simple enough. Before I begin, I chant these instructions to myself, mentally map out my walking pattern and then with a deep breath and a smile on my face, I take my first step. Before I know it, the reggae music has entered my body thus positively influencing my heart rate which had been coasting around the speed of a jackhammer. I try to acknowledge the public, photographers, and video cameras as I float through the space all whilst praying that I won’t trip on my floor grazing skirt. As I re-enter the backstage area, I am greeted by Monika who is having a party of her own and I am suddenly filled with joy. 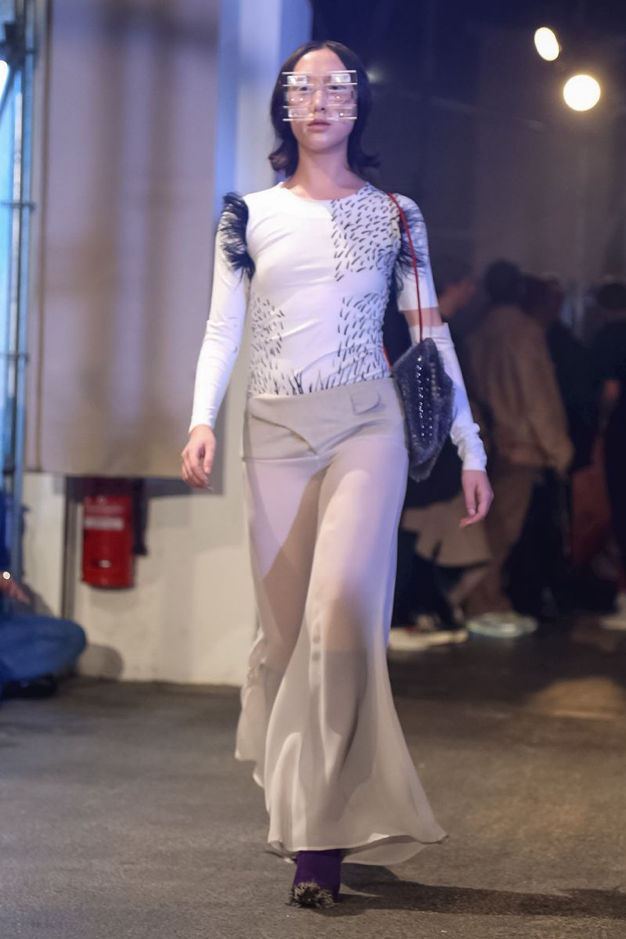 On to the second look. My next outfit is designed by Laia Liu Lipp. In an article entitled, “Six design graduates putting Switzerland on the fashion map”, DAZED Magazine wrote,

Laia Liu Lipp’s collection was all about the nuances of being a woman, and presenting an alternative view of what femininity is. “It was about my own subjective point of view and experiences of being a woman,” she explained. “I tried to show a bit of the hidden ‘feral’ woman but a natural way.” Replicating underarm hair with black feathers sprouting from a nude body, and a merkin created from faux fur, this ‘feral’ woman stalked the runway in shoes that were inspired by Swiss artist Méret Oppenheim. Elsewhere, cutouts revealed the models’ chest, stomach, and hips – often a focus in conversation around women’s bodies. The pièce de résistance, though, was a fake breast worn on the outside of a jacket, created out of rubber so it was invitingly tactile, said Liu Lipp.

(For full article, including review of Britschgi’s collection, visit: http://www.dazeddigital.com/fashion/article/39704/1/six-design-graduates-putting-switzerland-on-fashion-map-institute-fashion-basel) 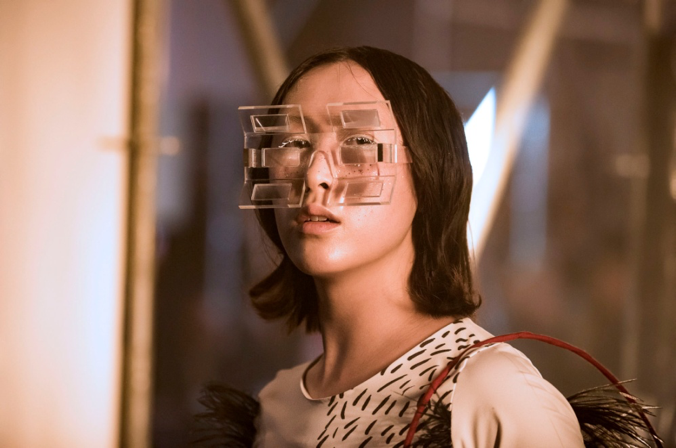 In my opinion, this look was the most stereotypically “high fashion”. I wore a white bodysuit with black feathers sprouting from my underarms paired with a pair of light beige sheer trousers which exposed my bare buttocks from the back. My look was paired with a pair of heels covered in spikes resembling porcupine quills, a pair of purple and orange knee high compression socks (worn, partially over the heels), a textured bag made of thick grey silicone, and pair of clear angular sunglasses.

This look made me feel like a fashion model. Strutting “confidently” (as confidently as possible when walking in heels with double vision), posing for photographers, and exuding a blend of animalistic and feminine qualities. 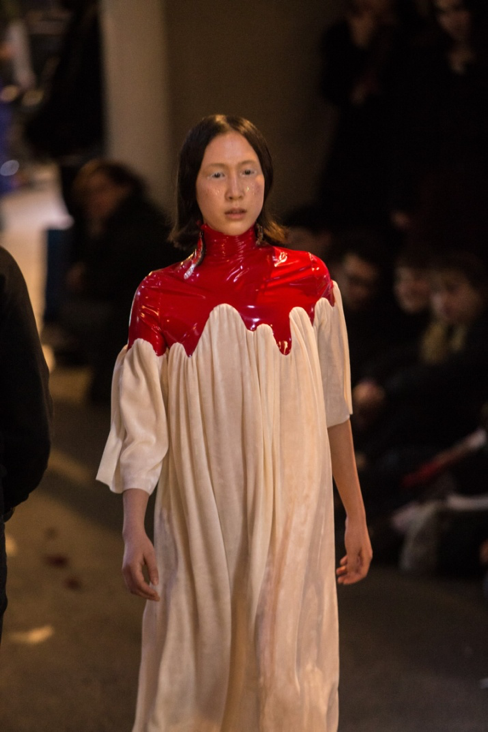 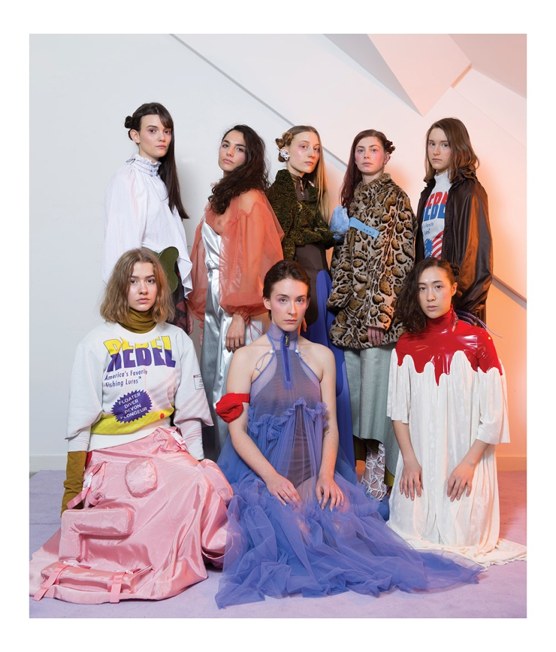 My final look of the evening, was a dress by Nina Britschgi (for sale at: http://www.ninabritschgi.com/store/p9/Blood_Dress.html). The “Blood Dress” was the first

look from Nina’s collection entitled, “Lifestyle of a Postapocalyptic Urban Peasant”. As the name suggests, it was made to resemble dripping blood. Nina’s collection was composed of eight looks in a colourful palette which creatively juxtaposes the dystopian nature of the concept. However, at a closer glance, one can notice the judicious details that set this collection apart. For example, the pattern of one of the women’s trousers was created based off of a zoomed photograph of a blood sausage. Others (including myself), had fishing baits hung from the zippers of our clothing.

As for the show, Nina’s concept was the most performative, and therefore challenging. As aforementioned, “Lifestyle of a Postapocalyptic Urban Peasant” is a reimagination of a Dystopian Science Fiction Film. In a means to utilise her resources and surroundings, Nina split the models into two groups to portray different characters and their responses to the onlooking public, photographers, and the dozens of video cameras set up to livestream the event. The first group was instructed to actively seek the cameras and approach them with curiosity and aggression whereas the second group was instructed to intentionally avoid making eye contact and to exude a paranoid energy. As a result, her collection was presented through a performative manner which allowed spectators to view the clothing while simultaneously illustrating the concept.

It’s 11PM, the show is over and I find myself wishing I could do it all over again. Backstage, designers are celebrating, photographers and journalists are capturing their final shots and models are readying themselves for the after-party. Champagne bottles can be heard popping over the laughter of relieved and joyful designers who’s hard work has payed off in a spectacular way. For them, the end of this show, Land On Glitter, marks the beginning of their professional careers. 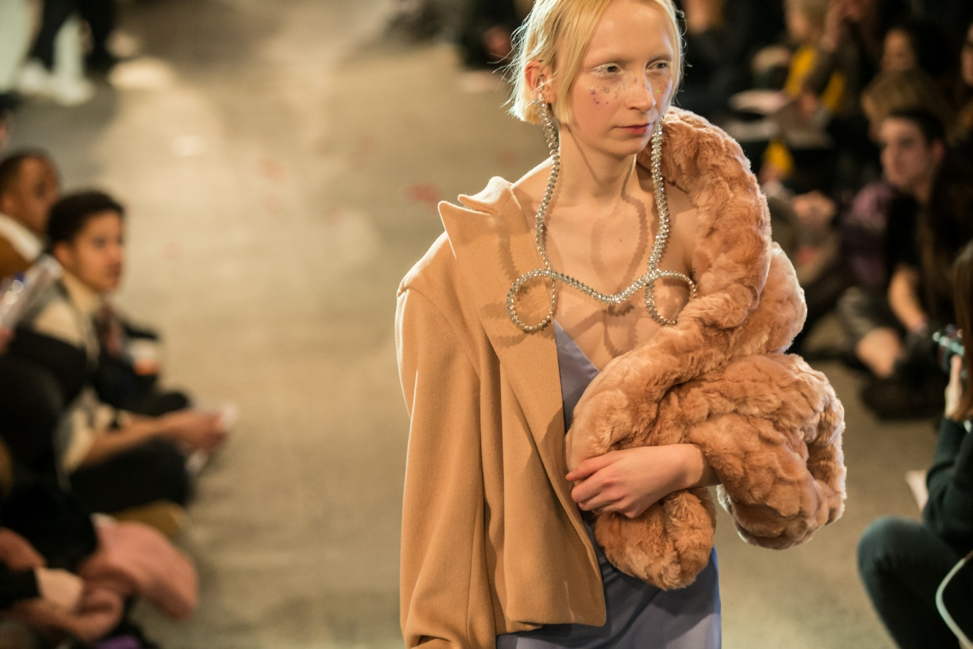 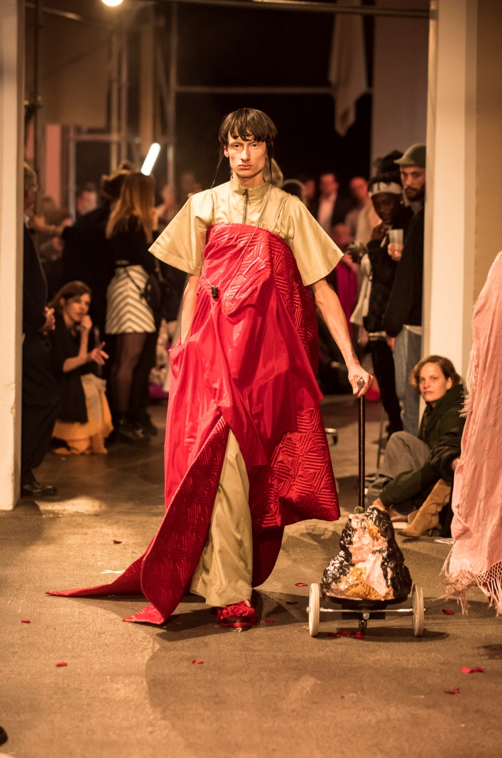 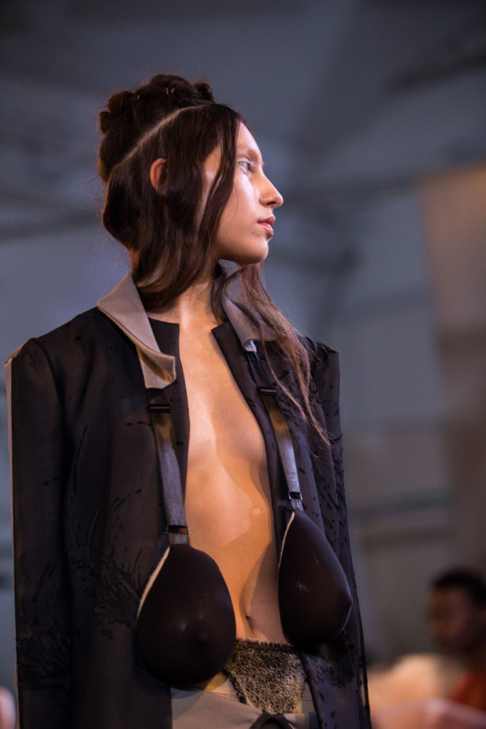 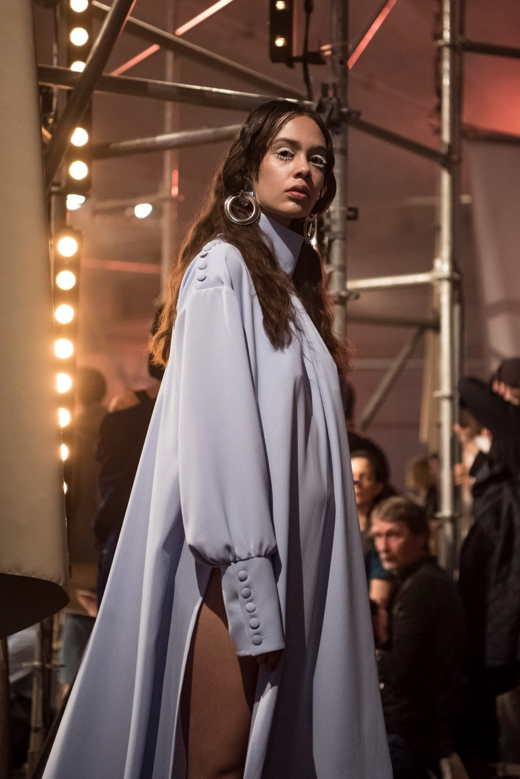 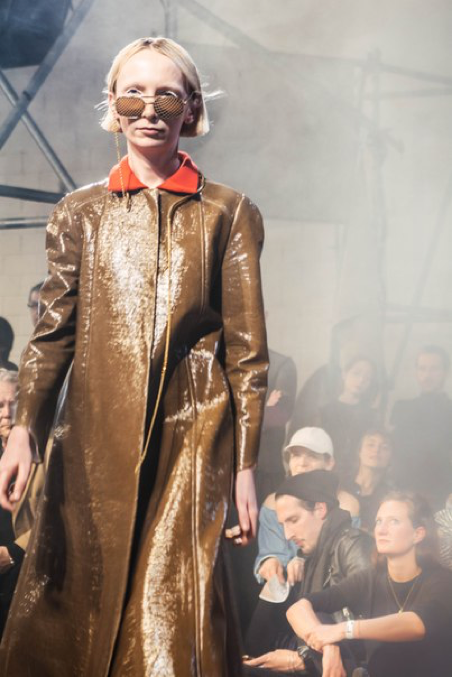 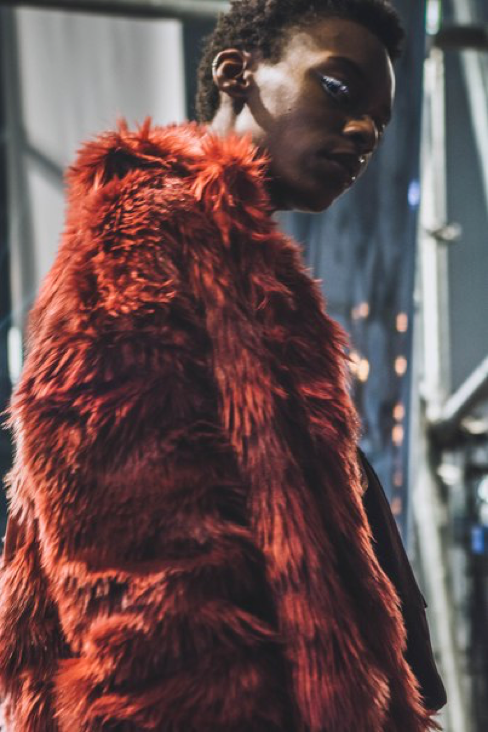 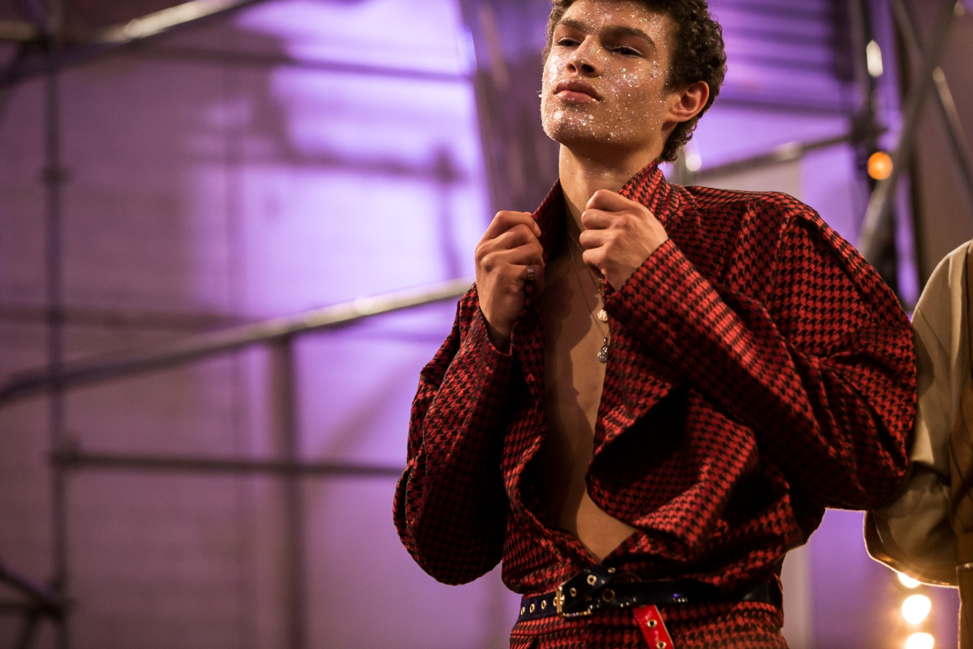 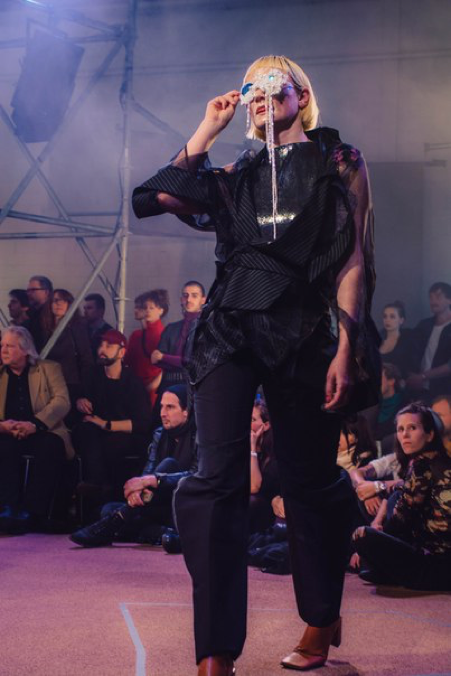 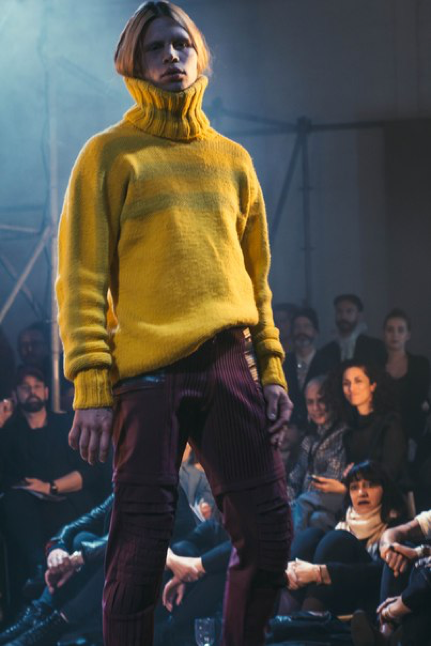 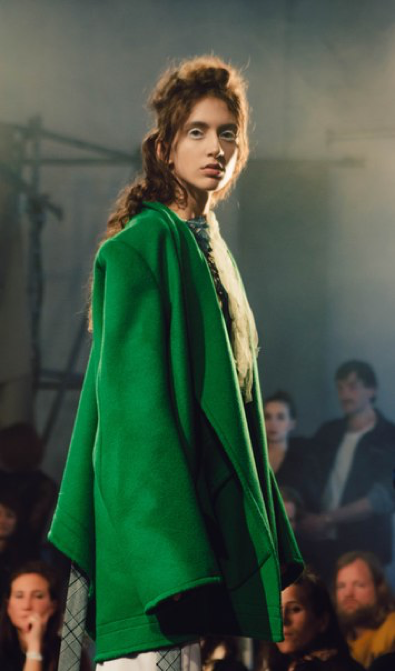 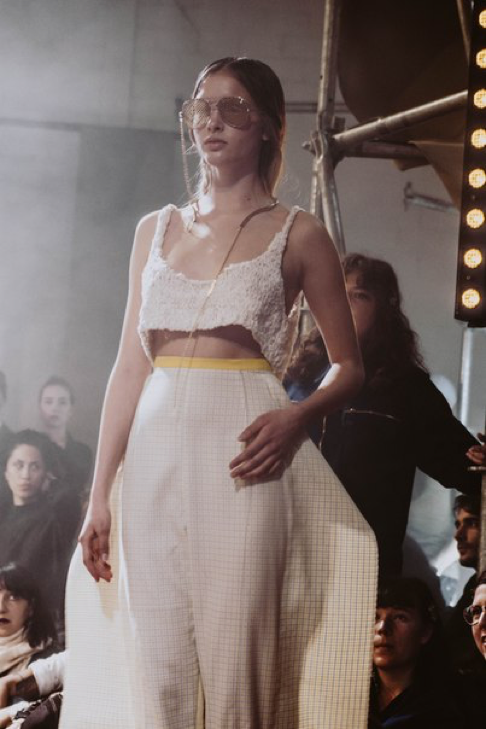 Back to top
Compare